About Axis Game Factory's AGFPRO BattleMat Multi-Player (DLC) Invite your friends to a fun multi-player (up to 8 players) RPG adventure where the only limit is your imagination. Use the GM (Game Master) system to lead your friends on a journey of heroic proportion. Don't want to worry about a GM, no problem.. Build a fully Co-op world of adventure and quest hand in hand! Take the battle to the next level by building Armies and battling to the death! Need more tactics.. Teams of players can join forces and fight for total domination of the Map with our Objective System. Can't finish the battle because real life gets in the way.. Save your game for later, players can drop in and out of saves easily with the GM Miniature Assignment System. Too much story for you.. load a map, drop in some miniatures and enjoy a quick and dirty battle. You make the rules, so any game system you have played in the past can be enjoyed in Battlemat's versatile multi-player 'Virtual Playing Space'. All these great game modes and any others you may make for yourself are played on Maps and Dungeons you create in AGFPro Basic or Premium Edition.

* AGFPro Basic or Premium Edition is required to play this DLC 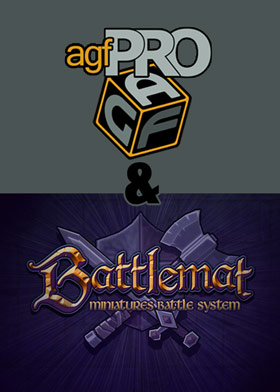